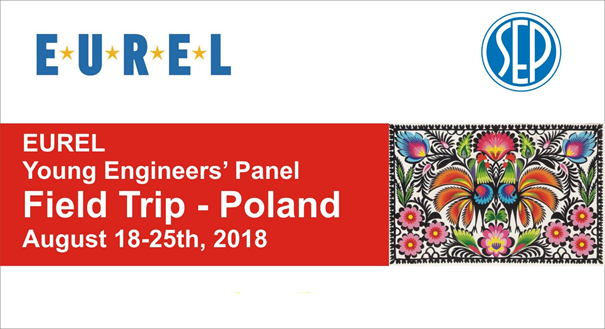 We hosted in Poland a group of four YEP representatives:

Hannes Filip and Daniel Maierhofer – students at the Faculty of Electrical Engineering and Information Technologies of the Vienna University of Technology in Austria,

Lior Puyeski and Moshe Wittman – students at the Faculty of Electrical and Electronic Engineering of Ariel University in Israel.

During the entire trip, the participants were assisted by their colleagues from SEP’s Students’ Coordination Board (SRK SEP): Kamil Tymiński – the Chairman of SKR SEP from the SEP Białystok Branch, and Przemysław Twardy from the SEP Krakow Branch, the AGH University of Science and Technology Chapter.

Jacek Nowicki, the SEP Secretary General, accompanied the group during most of the trip.

We started the event with a tour of Warsaw by night, enjoying the view of the beautifully illuminated National Stadium and the boulevards along the Vistula River. 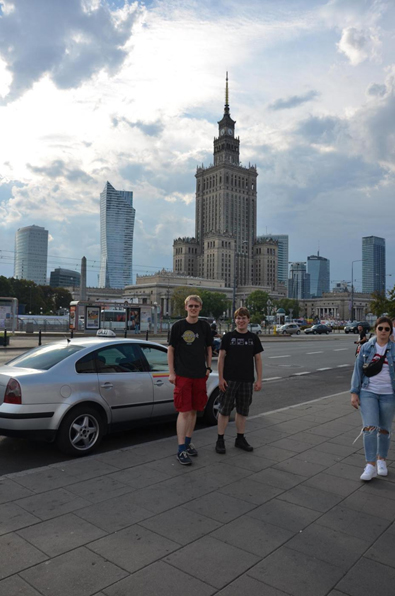 Our participants spent Sunday at the Copernicus Science Center, where they had an opportunity to visit a number of exhibitions and conduct experiments in various disciplines, including physics, mechanical engineering, biology and psychology. The part which attracted the most interest of our guests was an exhibition on magnetism and the High Voltage Theater. After visiting all exhibitions group participated in the show on the history of the conquest of space at the “Copernicus’ Sky” Planetarium.

Next on the itinerary was a visit to the roof gardens of the Warsaw University Library. Then the group attended the gala of the Edward Mosberg Award for the Righteous of the “From the Depths” Foundation, coupled with the premiere of a film entitled Destination Unknown in the Kinoteka in the Warsaw Palace of Culture and Science. 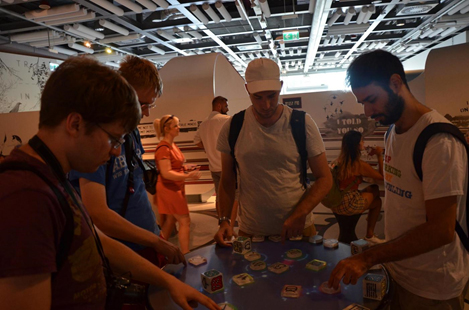 Our visit to the Copernicus Science Centre in Warsaw 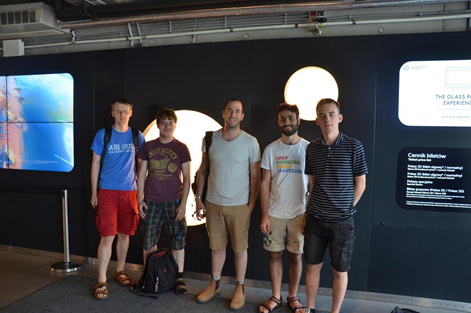 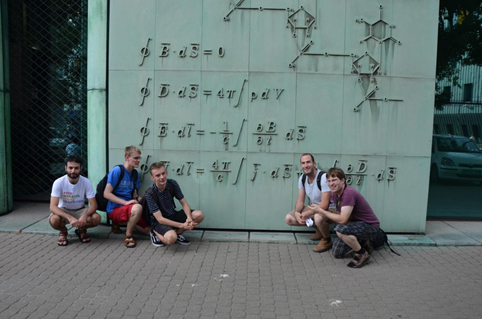 The next day of the trip began with a visit to the Main Office of the Association of Polish Electrical Engineers (SEP) at 14 Świętokrzyska Street in Warsaw. We were received there by Jacek Nowicki, the SEP Secretary General. He discussed the itinerary, adding some interesting stories about the SEP and the history of Warsaw and Poland. All participants introduced themselves and talked about their first impressions of Poland. Small gifts were given to our guests as souvenirs. A keepsake photo was also taken. 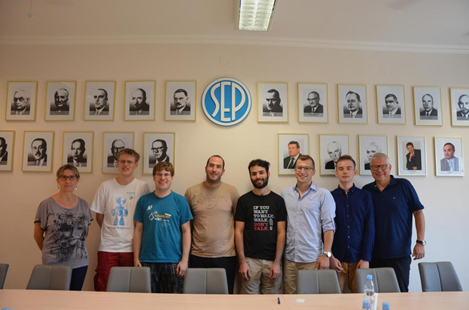 Then the group set out on a tour of the streets of Warsaw’s Old Down. Assisted by a guide, our Colleagues learned about the city’s history and visited the strategic landmarks on the map of Warsaw (such as the prestigious Krakowskie Przedmieście street, the Mermaid Statue, the Castle Square with the Sigismund’s Column, the Royal Baths Park, known as the “happiest place in Warsaw”, and its Palace on the Isle and the Fryderyk Chopin’s Statue). 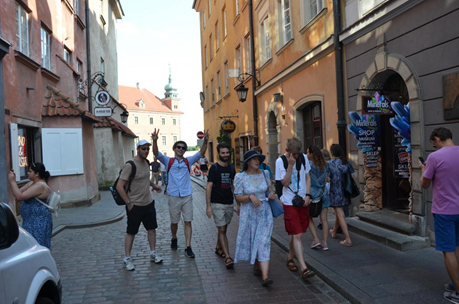 Sightseeing in Warsaw – the Old Town

Our guide at the Station’s power unit was Mr. Andrzej Jamaszek, the Automation and Measurement Foreman, who has been working in the plant continuously since 1970. The visit focused on the Station’s latest, eleventh power unit with a capacity of 1075 MW. Our group was particularly interested to see Europe’s most modern turbine generator set of this capacity, supplied by Mitsubishi Hitachi Power Systems Co. We visited all major technological components of the new unit: the coal feeding system, the boiler and the cooling tower. In the unit’s control room, we accompanied the start-up operation and raising the unit’s power output after a weekend downtime for maintenance. At present, it is Poland’s largest power unit. 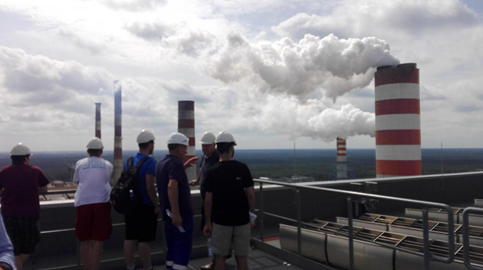 On the rooftop of B11, the latest power unit of the Kozienice Power Station – capacity of 1075 MW

Krakow is one of Europe’s most beautiful cities. Appreciated by tourists from all over the world, the city’s rich appeal is rooted in its historic heritage and thriving cultural life. In 2006, Krakow was ranked the world’s most fashionable place by the US-based Orbitz travel agency.

In Krakow, our group stayed on the campus of the AGH University of Science and Technology. We were joined there by young members of the SEP Krakow Branch: Maciej Burnus and Arkadiusz Jurczakiewicz, who were very helpful in organizing our stay in Krakow.

The most interesting aspects of our visit to the CRS included:

Our guides gave group a tour of each department and answered our questions about the ABB Company. 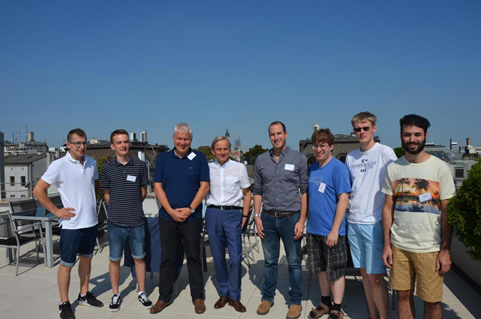 Next on the itinerary was a guided tour of Kraków’s landmarks. The group visited the following places:

Kazimierz District – next to the Old Town, it is the city’s most important cultural center, where historic synagogues and typical Jewish restaurants meet modern cafes and nightclubs;

Wawel Royal Castle – for centuries, it has been the central place of the Polish statehood. Today, the old royal residence offers an exciting journey into the history of Poland;

Main Market Square – Krakow’s main marketplace and administrative center for centuries. Today, it is a magnet for tourists from all over the World;

St. Mary’s Basilica – Krakow’s most important temple. For centuries under the patronage of rich burgher families, nowadays the church belongs to the most excellent examples of religious architecture in Poland;

Sukiennice (Cloth Hall) – situated in the middle of the Main Market Square, the Cloth Hall is one of Krakow’s most iconic landmarks. Just like in the past, its function is chiefly that of a center of trade, even if merchants of old have mostly been replaced by tourists;

Barbican – Krakow’s Barbican is one of the most glamorous examples of medieval military architecture in Europe. Until the early 19th century, i.e. until siege strategies changed, the Barbican’s structure had made it nearly unbreakable.

On Thursday, the group visited former German Nazi concentration and extermination camps Auschwitz I and Auschwitz II – Birkenau in Oświęcim, which have come to symbolize the Holocaust and Nazi crimes against the European nations. It is a place which had a particular impact on both Polish and Jewish history.

It is a memorial site and museum where one thinks back to horrors of World War II and pays tribute to those murdered. For our trip participants it was a moment of reverie and reflection.

Our trip to the south of Poland ended with a visit to the Wieliczka Salt Mine. One of the most valuable examples of Poland’s material and spiritual heritage, it attracts more than one million tourists from all over the World every year. It is also a World-class heritage site, inscribed as one of the first twelve sites on UNESCO’s World Heritage List.

A vintage mine cage took us 64 meters underground. Then we set out on a magical journey through a maze of salt corridors to discover the traditions and history of the Wieliczka mine, illustrated by beautiful chambers carved in salt (the most spectacular one, St. Kinga’s Chapel, has excellent acoustics, appreciated by artists such as Nigel Kennedy or Blackmore’s Night who performed here), incredible underground lakes (the deepest one is 9 meters deep at its lowest point), majestic carpentry and unique salt statues (the largest one weighs 15 metric tons!). 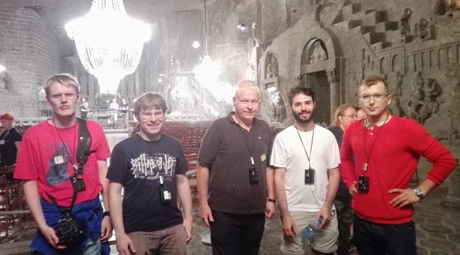 After a overnight journey to Gdańsk, we visited the LOTOS Refinery. We learned about the process of crude oil fractionation and its products, and we had an opportunity to see from inside how the accompanying industrial processes are controlled. After the visit to LOTOS, we also took a tour of Gdańsk and the seaside, despite of rainy weather. 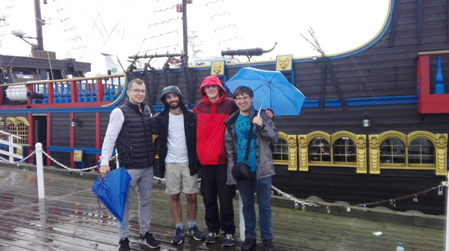 Gdańsk in the rain – one of the last moments of our trip;
left to right: Kamil Tymiński, Lior Puyeski, Hannes Filip and Daniel Maierhofer

The last day of our trip: the day of goodbyes and departures. The participants enjoyed their visit to Poland very much and spoke highly of the itinerary and the number of attractions we had provided them with. We received many kind words about our days spent together in Poland, and promises of a reunion in near future. We hope that their memories of the stay in Poland will be good and lasting.

Our special acknowledgements are due to our colleagues Kamil Tymiński and Przemek Twardy, who organized the trip and accompanied the group throughout their stay in Poland, contributed a lot of their time, and made sure that everything worked perfectly.

We would like to thank the SEP Radom Branch, SEP Kraków Branch and SEP Gdańsk Branch for their support in organizing and financing the trip.

EUREL YEP Field Trips are organized by EUREL for young people every year. We invite students and young professionals to use this exciting opportunity to network with other young electricians and travel to various countries across Europe!

By: Anna Dzięcioł – SEP Research Department, on the basis of:

– a report from Jacek Nowicki, the SEP Secretary General

– a report from Przemysław Twardy and Kamil Tymiński, the SRK SEP